I went to dinner with a few friends on Sunday night. It was a beautiful night and we were able to get outdoor seating! As we were discussing our weekend one of the guys shouted out “Is that football?” He was referring to the game he saw on the television through the restaurant window. Then a couple walked by and ironically they shouted the same question. Sure enough it was a football game. We are still enjoying our summer here in the Northeast so it was surprising to us to see a football game on TV. It was actually the Hall of Fame Game and the start of preseason.

I wasn’t particularly interested by Sunday’s game; however, I found myself really intrigued by the player’s non glare eye strips. Also known as eyeblacks, eye smears, eye black strips or eye blackouts. Check out the screen shot of the players above. Two of the team captains are wearing them. One with them under both eyes (#17 Ryan Tannehill) and the other (#96 Paul Soliai) with a large smear under one eye. Ryan Tannehill is wearing them traditionally. I’m not sure about Paul Soliai’s smear. Because of it’s shape, I would think it is warrior paint.

Have you noticed that they have become a trend over the past few years? It is interesting to see how something so simple has evolved into a form of expression. 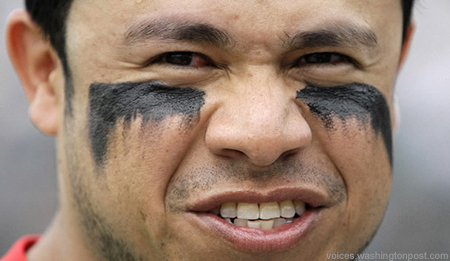 War Paint Eyeblack: Baseball player, Alfredo Amezaga, wears his eye black like war paint as if he were preparing for a battle. It’s appears to be symbolic of strength and confidence. You’ll usually see this done by football players. Wrestlers are creative with their war paint eye black too. 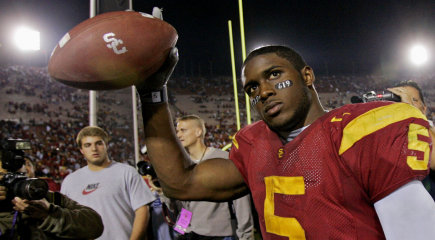 Eye Black Messages: Reggie Bush is known as one of the first to display messages in is eyeblack. The numbers 619 are his area code in San Diego. 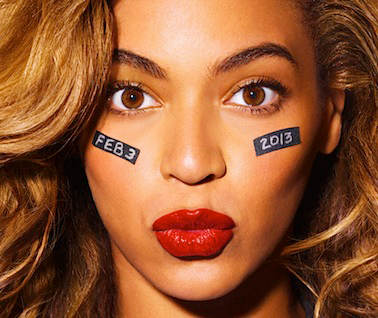 Promotional Eyeblack: In this photo, Beyonce creatively announced that she was going to perform at the 2013 Super Bowl Halftime Show by wearing customized eyeblacks with the Super Bowl date.

Wow! You can put a logo in an eye black.

As I was watching the game, to my surprise, I noticed that one guy had a logo in his eye blacks. I squinted and looked twice. Then thought, “that’s genius!” Who would have thought of putting a logo there! Why not? It’s such a great idea like the examples below.

Athlete Signature Eye Strips: Several athletes, such as tennis player Bethanie Mattek-Sands and softball player Monica Abbot, have their own branded eye black stickers with their personal or team logo. 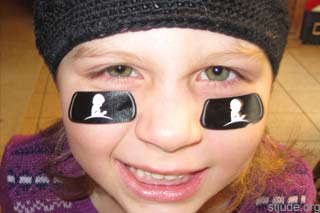 Awareness Eye Black Strips: The St. Jude Game Day Give Back fundraiser encouraged friends to host charitable football parties to help St. Jude raise funds and save kids’ lives. This cute little girl is showing her support with eye black stickers that have the St. Jude logo on it. 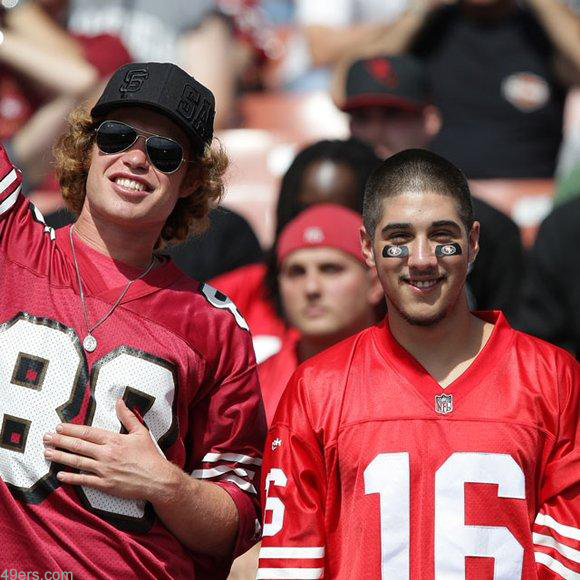 Look To Your Surroundings For Different Branding Opportunities

I’ve come to learn that non-glare eye strips are being used everywhere. What makes them so interesting is that it’s such an unusual way to promote. It has become another opportunity to brand, motivate, show team spirit or express yourself. We now see logo eyeblacks used at tradeshows, in parades, at concerts and for fundraising events. They are used in several sports, not just football. They are used in baseball, softball, lacrosse, soccer, car racing and tennis too. Eye blackouts are fun team spirit promotions. You can sport eyeblacks with your team logo or customize your own.

Babe Ruth was one of the first to sport eye black in the 1930’s. He rubbed grease under his eyes to help reduce sun glare. It hasn’t definitively been proven to work at reducing glare but look at the trend and promotional opportunity that it has become.

Traditionally created with black grease made of beeswax, paraffin and carbon but now offered as fully imprinted peel-n-stick logo stickers. This is a great example of how you can take what is available in your surroundings and turn it into a brand opportunity.

Wether it’s with eye black strips or not, there are ways to promote all around us. So, dare to be different!

What are your thoughts on eye blacks and how they are used to display messages and used for branding?

Do you believe in creating a new form of advertising? What ideas would have to use eye black for your business?  Have you ever offered something different?

70 thoughts on “A Branding Opportunity Right Under Your Eyes. Dare To Be Different.”