Who would have thought that going green, you know, being more environmentally considerate, could be good for your business in the short term? Well that is exactly what you could get with advertisements on none other than a bike. If not there yet, than sure to come to a city near you is a bike share program that is quickly popping up in most large US cities. Coast to coast and north to south, many cities are adopting bike share programs to not only help keep down fuel emissions and gas cost but also to promote good health. While all of these reasons are great on a personal level, we can learn a lot from this program on a business level also. 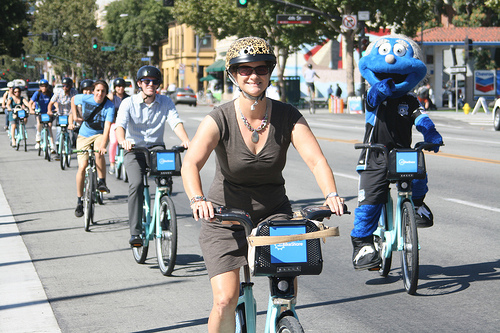 First started in The Netherlands (Amsterdam) in 1965 the project that had nothing but good intentions soon failed do to vandalism and stolen bikes. Like most things, as technology evolved so did bike sharing programs internationally. As a solution to the vandalism/theft problem, Portsmouth, UK, installed electronic bike racks in the 1990’s. In addition to the electronic racks were smart cards which for a small fee allowed a renter to access the bicycles without anonymity. If the bike came back damaged in any way or didn’t come back at all than the renter was charged a fee for the damaged property. The other component to the program that aided in its success was the installation of cameras that monitored the bike racks 24 hours a day and 7 days a week. Once the program was proven to be a success with some minor changes, it was slowly but surely adopted all over the world. China, Australia and the US now have bike shares programs. In preparation for the 2012 DNC (Democratic National Convention) the city of Charlotte installed bike share racks all around downtown Charlotte, NC so that the millions of people that swarmed the city would have transportation options. So what can we learn from this program in terms of business?

It was thinking outside of the parameters of what most would call the norm that made this program come into fruition. It is important that we not only consider what we know to be successful in business but also what we don’t know. Taking a risk can be nerve racking until you know the outcome, but usually is just what a business, new or old needs to either get off the ground or revamp and old idea.

One of the reasons the bike share programs are so successful is because they offer an alternative to what a customer already has. Consumers like options; no one wants to feel like they have no choice. When you go to a clothing store there are usually blouses or shirts in several different colors. How does this translate, although you may drive your car downtown or take the bus, you now have an option to park and hop on a bike. This saves gas, which we all know can be taxing on a car owner’s pocket, cuts down on fuel emissions, which helps the environment so we can go green if only for a few hours, promotes good health and in addition to all of these reasons, it’s fun!

I remember the first time I saw an advertisement for a talk show on the side of a bus. I thought it was loud, intrusive and didn’t like the fact that all of a sudden I was being bombarded by advertisements even on the ride home. But I have to admit, I watched that show and soon all of my family and friends were watching too. Every day when I saw that bus it was a constant reminder that at 6:00pm my new favorite show was on. It was impossible to forget to watch because the advertisement was always there. Just imagine your advertisement on a bike. Bicycles can go places buses can’t. Imagine how many people could see your advertisement on a bike trail on a Saturday that would never venture downtown for any number of reasons. The new exposure maybe just what your business needs to reach the next level of success or continue to be successful. 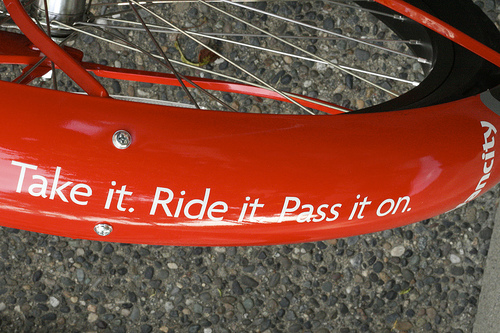 Sometimes what is popular in the moment will like most things with time fade, but when we find something that is not only trending across the country but it will promote going green, aid promotions for a healthy lifestyle, and make you use your imagination and it is a great opportunity for marketing it becomes something to consider. So maybe you won’t market your company on the side of a bike, but by dissecting the bike share program that is being adopted across the country in cities such as New York, Seattle, Portland, San Francisco and Washington we see that there is always a new innovative way to market your brand.

What are some “out of the box” ideas your company has come up with? What are your thoughts on the bike share program? Have you seen it or participated?